Meeting alert – if you haven’t heard about proposed Transform-I-66 project, there is another public meeting VDOT is hosting next Tuesday Oct 6 from 7-9 pm at Mary Ellen Henderson Middle School. The schedule of other public information meetings is here.

Traffic is a regional concern for everyone – especially as our area continues to urbanize – but I believe the proposed I-66 changes could have an even bigger impact on our day to day lives. I learned more about this project last night at a presentation during a City Council meeting.

With job growth projected to increase 70% in Tysons and a more modest 25% in Arlington/DC and current traffic woes on I-66, VDOT is proposing to change I-66 to dynamic tolling (similar to the HOT lanes on the Beltway and I-95). Currently, I-66 is limited to HOV-2 inside the Beltway during rush hour and all other traffic is considered illegal and subject to ticketing. The proposed changes would increase HOV occupancy from HOV-2 to HOV-3, further limit or discontinue hybrid use of HOV lanes, and convert I-66 inside the Beltway to dynamic tolling both ways during peak periods. This means that inside the Beltway, you can only travel on I-66 during rush hour if you are HOV-3 or pay a toll. Estimated tolls would range from $7-9 per trip going eastbound in the mornings, $6-8 per trip going westbound in the evenings, and $1-2 to do the reverse commute. Toll prices would change depending on traffic volumes in order to manage the demand for the lanes. The lanes would remain free to all traffic during non-peak hours. Outside the Beltway, there would be separate lanes for HOV and toll-paying traffic too. Also, outside the Beltway, the proposal includes VDOT widening the right-of-way which would sacrifice some homes to make room for the toll lanes. 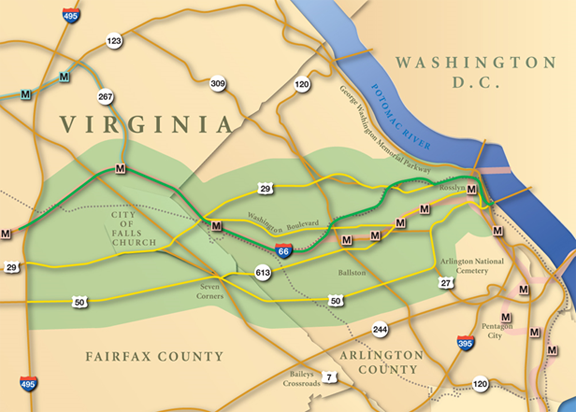 –> Letty’s thoughts: while I certainly appreciate all the work and planning by VDOT to attempt to ease congestion on I-66 and plan for future growth, I am concerned about the impacts to the City of Falls Church.

According to the Transform 66 website, tolling construction and implementation of the first phase of the proposal is expected to start next year, with tolling to begin in 2017.

Clearly more public awareness and debate is needed on this proposal! To learn more about the project, to leave VDOT feedback, or find out about other public meetings besides next Tuesday’s, visit inside.transform66.org.